Frau Agnes is based on a real-life person. In 2013, that lady already inspired a puppet for the BR show “Sauhund”, but I always felt that she had some further potential to explore. So I created a new character and built a puppet for it: Allow me to introduce Frau Agnes!
During the workshops, she assisted me, serving as a vivid example of her kind. But being an enthusiastic reader of the yellow press in possesion of a VIP tag -I made them and she somehow must have gotten hold of one-, she took some time off and went around the bumm film compound hunting for celebs (from left to right: “Mara” Lilian Prent, Sophia Leonard, Esther Schweins).

Oof, I won’t lie – I am a bit ‘kaputt’ right now. At the beginning, I was a bit shocked hearing that a lot more workshops were to be held than originally planned. Demand was so high that instead of two workshops (one on Saturday, one on Sunday), we now offered five!

However, Looking back I would not have liked to cancel any of them. The amout of creativity that the particpants showed was really incredible. In 2 days, nearly 40 really expressive puppet characters saw the light of day! Lots of thanks to the participants, and kudos also to bumm film, who offered this workshop during their DVD-release party of “Mara und der Feuerbringer“. 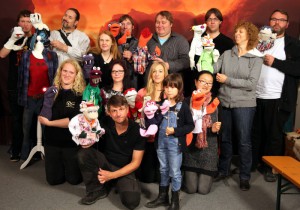 The sunday’s workshop’s puppets – and their mothers and fathers.

Oh, what a day! Three workshops are over. Of course, two hours are a really tight schedule for teaching eight participants to build sock puppets. Forming them to working characters was the thing which I considered really difficult. Hence, I really, really do appreciate the results. But have a look for yourself… 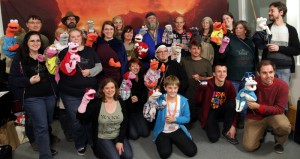 And once again, many thanks to my participans. I had a great time with you!

Preparations for the workshop are running high. Subscriptions as well. Wow! We had to announce some supplementary courses…

Currently, I am preparing the seminar room. I want to exhibit some puppets as examples, and show more of them in a picture gallery (for some samples, see below). Additionally, in one corner of the room, a demo reel video showing the puppets in action. Maybe, I will show a (shortened) version of the reel here in the blog….

During the upcoming weekend, Saturday 24th and Sunday 25th of October 2015, I will show newbies how to build simple but appealing sock puppets. The two-hour workshop takes place in Munich and will be repeated several times during these days. Is is part of an event around the DVD release of „Mara und der Feuerbringer“. If you are interested in getting one of the last free slots, contact either me or the organizers via the facebook fan page.

Bernd is back again!

Second day of shooting for three all-new episodes.
Morle is a mangey cat constantly straying around Bernd and getting on his nerves. The only thing you see from her is albeit her curling tail.
To make a realistic impression, I built the prop with anatomy in mind: a set of two opposing wire ropes moves the segmented tail, analogous to a real cat’s tail with its vertebrae and sinews. I think the motion is quite realistic! 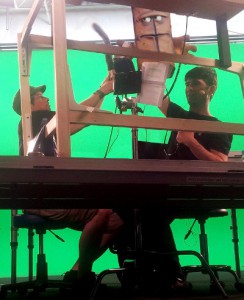 Now all the details of the last weeks come together: beginning with the draft of December 2nd, the fake confectionery from December 5th, loads of custom made decoration in puppet scale and the puppets. Welcome to Coffee & Treat 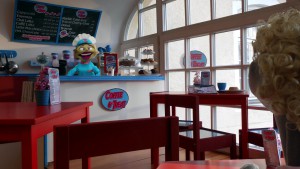 Together with the waitress of the coffee shop the main cast of the upcomming webseries.
A last-minute revision of the script forced me to totally re-style the puppet. Originally, I had a much younger character in mind. Finally, all that was left (apart from the “naked” puppet) was the nose.

Above, the final charakter after the changings. Below the much younger predecessor version. 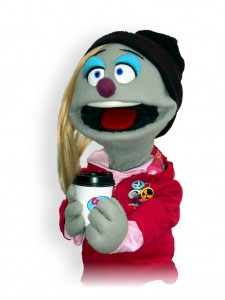 The first puppet for the planned webseries is finished. The coffee shop’s waitress in her service clothing. She’s based on the first draft of the character as seen in the sketch from December, 2nd. 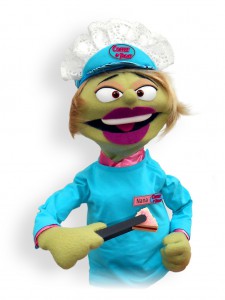 On location with the DingStars.

In addition to the talking every-day items already known, this time I inroduce a more elaborated type of puppet. They have a body and rod-controlled arms. An example from sketch to finished puppet of an Erlenmeyer flask.